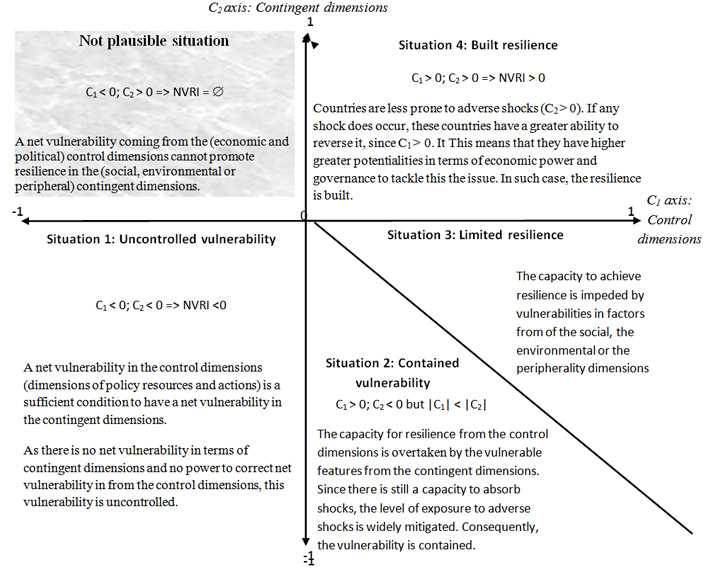 The situation that appears grayed out on the graph is an impossible configuration. Specifically, a net vulnerability arising from the control dimensions can in no way promote performance in other dimensions. The state of uncontrolled vulnerability comes after recurring implementation of inappropriate policies (e.g., choice of productive specialization, inappropriate economic strategy, failure in the governance system, deficient rules of law, etc.). The situation of contained vulnerability is illustrated by the case of countries that have adopted accurate choices of economic policy but that have negative and not (yet) counterbalanced performance in the contingency dimensions. Limited resilience describes a situation in which a country achieves satisfactory results because of its performance in its control dimensions. But these performances barely neutralize the poor results achieved in the contingency dimensions (including the country's ability to conserve its natural resources and to manage the pernicious effects of peripherality). This leads to a state of low resilience. Finally, a stable resilience describes the typical ideal scenario whereby a country's resilience capabilities significantly offset the effects of its sources of vulnerability.

An application of the NVRI on worldwide data

The NVRI is calculated for a set of variables for which normalization methods are applied. NVRI ranges from -1 (vulnerability) to 1 (resilience). The database used is composed of different types of countries in compliance with the typology elaborated by Nielsen (2011). We thus differentiate 4 groups of countries: G1 - Most Developed Countries (MDC), G2 - Average Developed Countries (ADC), G3 - Least Developed Countries (LDC) and G4 - Small Island Developing States (SIDS). We then test to what extent SIDS are intrinsically vulnerable, as stated by the development economics literature. Application of the NVRI to 95 countries for the 2000–2009 period yields the following results.

Contrary to group G1, G3-group countries exhibit a net vulnerability that results from both the control (-0.05) and contingent dimensions (-0.17). Though remoteness is an important factor of vulnerability for the LDCs, their vulnerability is reinforced by economic and political deficiencies. Better integration of LDCs in international trade appears a key challenge that should be tackled with more accurate development support at both national and international level.

G2-group countries present an intermediate level of vulnerability–resilience, ranked between countries from G1 and G3. The main ADCs (which are non-SIDS) are characterized by a resiliency capacity driven by their control dimensions (0.02) as a counterweight to the vulnerability resulting from their contingent dimensions (-0.03). In these conditions, the NVRI (-1.17%) is close to zero. The ADCs are resilient on their control dimensions (0.02), just like the MDCs (0.25), but stay vulnerable due to their contingent dimensions (-0.03), just like the LDCs (-0.17). Improvements are required in several dimensions before they can bridge the gap to the MDCs. Note that the ADCs still present a high level of governance vulnerability (0.50) that is comparable to the results for LDCs and SIDS.

Do SIDS have to contend with structural determinism in terms of vulnerability-resilience? The results show that SIDS are effectively more vulnerable than the MDCs, but are nevertheless less vulnerable than the LDCs. On average, there is no significant gap between the SIDS (0.03) and the LDCs (0.02) in terms of net vulnerability on the control dimensions. The slight difference between these two groups is explained by the difficulty of SIDS to compensate for their vulnerability on their contingent dimensions (-0.07 on average for the SIDS against -0.06 for the LDCs). To sum up, the domains in which SIDS can improve their resilience are the contingent dimensions (mainly the peripherality and environmental dimensions).

The added-value interest of the NVRI stems from the dual reading allowed by the aggregated value and the values obtained for each dimension. Reading the global-aggregate index results serves to classify and assess the different countries in terms of sustainable development. Reading the NVRI results dimension by dimension sheds light on the sources of deficiency of a given country. Then, to promote resilience, specific measures oriented towards the weak dimensions must be put in place to neutralize the sources of vulnerability.

Utilization of the NVRI as a guide for action

By pinpointing strengths and weaknesses on different dimensions, the NVRI helps identify where action support should be made a priority, and for which countries.

Figure 4. The vulnerability-versus-resilience factors at a glance 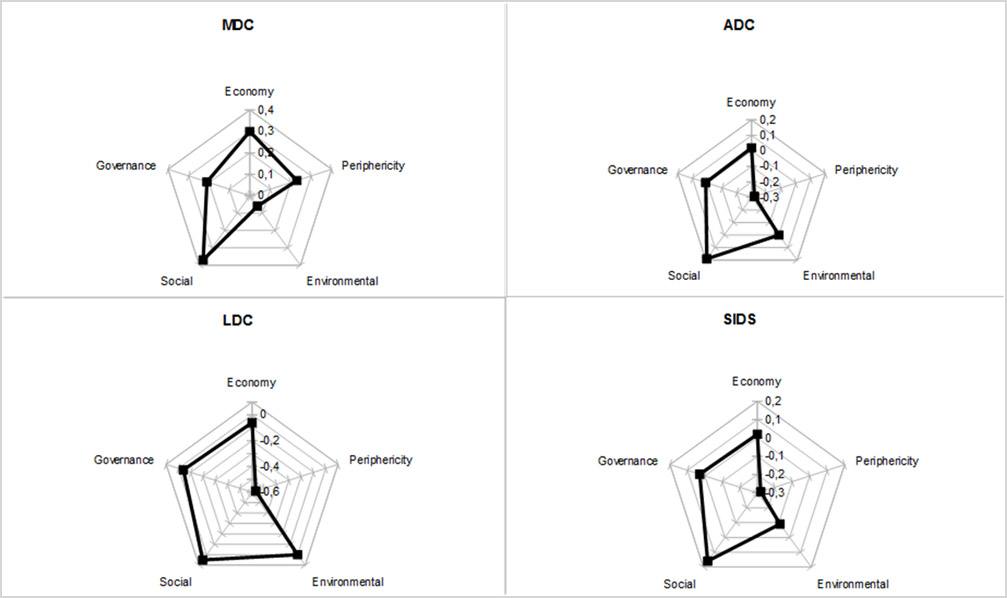 The vulnerability of the LDCs (G3) points to three big conclusions:

Similarly, the following conclusions can be drawn for the SIDS (G4):

The following observations can be made for the MDCs. The MDCs are the most resilient countries of the sample, and they present little opportunity to suffer a shock (economic or environmental) that could put them in the worst situation (uncontrolled vulnerability). We could speculate a threshold below which an extreme negative shock could leave these countries unable to recover, but for any shock of equal importance, the MDCs remain the country category with the highest capacity to bounce back.

Even though the MDCs show stable resilience, they can still improve their environmental results. This policy line is not so surprising given how environmental concerns has recently climbed the public policy agenda.

The policy approach to be followed to increase the resilience of MDCs includes the improvement of economics and environmental processes, the promotion of environmental-friendly practices and the adaptation of governance infrastructures for managing the environment. In this area, it is the MDCs that have the capacity to impel action—they are the only ones in possession of the economic resources, political design and social awareness necessary to promote resilience on the environmental dimension. The quality of governance but also the choices of economic policy and growth strategy are discriminant explanatory factors for the (sustainable) development of any country.