Vulnerability and resilience have been climbing the economics research agenda since the 1990s, especially in development economics (Angeon & Bates, 2015) where the scholarship has attempted to define these concepts and empirically assess them at different geoscales (country, territory, social and ecological system, etc.). This scholarship has reached a broad consensus that presents the two concepts as symmetrical, which means they can be used at any given point in time. Vulnerability is commonly defined as the level of exposure of a system (here a country) to exogenous hazards (Adrianto & Matsuda, 2004; Briguglio, 1995; Guillaumont, 2009, 2010, 2015, 2017; Turvey, 2007) whereas resilience designates the ability of a system to cope with shocks or withstand their impacts (Adrianto & Matsuda, 2004; Briguglio, 1995; Dabla-Norris & Bal Gündüz, 2010; Guillaumont, 2009, 2013, 2015, 2017; Guillaumont & Wagner, 2013; Rose & Krausmann, 2014).

A measure of vulnerability and resilience

The EVI which was originally computed for developing countries is used today as a criterion for allocating international aid. Revisited in 2011, the EVI now integrates an environmental sub-index. Nevertheless, the EVI, like other indexes, should be rooted in sustainable development philosophy in accordance with the World Bank (2008) and Rio+20 recommendations for inclusive and sustainable growth. To reach this objective, a robust method for selecting adequate variables is needed. The NVRI aims to refine the assessment of vulnerability–resilience by thinking in terms of sustainable development.

Developed by Bates & Angeon (Bates et al., 2014; Angeon & Bates, 2015; Bates & Angeon, 2015), the NVRI makes a significant methodological contribution to the art of building composite index based on a holistic and sustainable development approach. The NVRI is multi-faceted yet avoids redundancy among variables that are distinguished according to their specific contribution to vulnerability-versus-resilience. Moreover, the NVRI can be calculated for any country (more developed and less developed), which facilitates comparisons across space and time. Finally, the NVRI can be presented as a scoreboard that shows development paths for any given country at any given time by pinpointing their strengths and weaknesses, and that efficiently defines criteria for allocating development aid.

The NVRI provides a standard metric for sustainability development concerns in compliance with operational action programs conceived by international organizations that advance sustainable development as a means for a country to mitigate, adapt to or recover from external shocks, thus reducing their vulnerability. The NVRI goes beyond just economics to factor other dimensions (governance, environmental, social and peripheral) and considers all these interdependent dimensions as a key element of country resilience.

Elaboration of the NVRI is essentially a two-step process. The first step is initiated by a survey of literature to select consistent and representative variables for each sustainability dimension. An initial set of variables is then selected. The second step consists in narrowing this set down and avoiding redundancies, but without losing any essential information.This selection process is implemented by the B2A algorithm. The B2A algorithm mobilizes graph theory to determine the network of directed relationships (i.e. digraph) that structures the minimum set of retained variables. Thus, a country’s vulnerability–resilience is captured by a set of interdependent variables (33 of which appear central to the NVRI calculus) and five dimensions.

The B2A algorithm allows a trade-off between a small number of variables and a satisficing synthesis of information for the five dimensions that explain the roots of vulnerability–resilience. Note that too many variables could result in a complex and expensive mode of calculus for assessing vulnerability-versus-resilience status without bringing any guarantee of real added value. Moreover, the B2A algorithm avoids arbitrary choices in the selection of variables, as it is built around a network of directed relationships among consistent variables.

The B2A algorithm allows not only to structure complementary links among vulnerability–resilience variables but also to rigorously demonstrate that all five dimensions are factored into the net metric of vulnerability and resilience.

There is a hierarchical relationship among the five dimensions. The NVRI differentiates:

The NVRI structure is depicted in Figure 1.

Figure 1. Structure of the NVRI 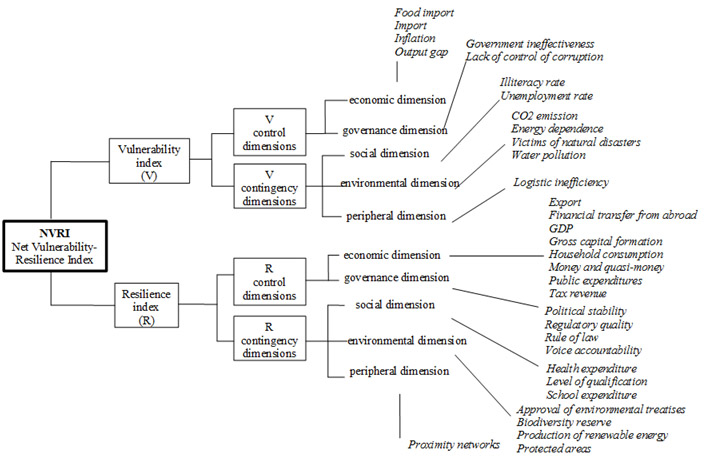 The NVRI follows 8 key principles: precision, simplicity, methodological soundness, easy-to-use interpretation, computational robustness, comparability, replicability and flexibility. This index, which is rooted in sustainable development philosophy, reveals the strengths and weaknesses of a country at a glance.